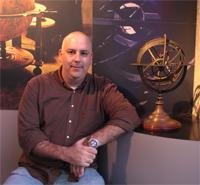 Born in Rio, he has a B.S. in Astronomy, and a Master’s and a Doctor’s degree in Physics. He works at the Rio de Janeiro PlanetariumOpen in a new window as Head of Astronomy, where he oversees show production, exhibits and the general scientific content produced by a staff of twelve resident astronomers. He specialized in Fundamental Astronomy, Chronology and Cosmology. He has six published books. For six years he was the Scientific Director of the Association of Brazilian PlanetariumsOpen in a new window, and later became its President. Since 2007, he is the Brazilian representative at the International Planetarium SocietyOpen in a new window Council. In 2012, he was awarded an IPS Fellowship.

This is the list of articles he has published on this blog: