José Roberto is outreach coordinator of the Planetary Society<b>planetary.org</b>: open in a new window in Brazil. 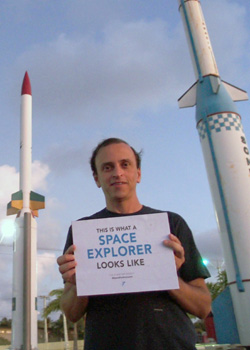 José Roberto de Vasconcelos Costa was born in Natal, northeast of Brazil. The city was the first rocket launch facility in South America. Natal also excelled in World War II, when the Parnamirim Field became the largest airbase in the world outside the United States.

His grandfather was an awarded civilian who worked at the Parnamirim Field during the conflict and, as a child, José Roberto made many visits to the airbase, playing on the junkyard of famous aircrafts. His passion for “all that is in sky” comes from that time. From aircraft to rockets, from spaceships to celestial bodies.

Graduated in Information Technology (IT) from the University of São Paulo, he worked while a student in an public astronomical observatory. There he make one of his first works on popular science: the website “Astronomia no Zênite<b>zenite.nu</b>: open in a new window“. His connection with the Planetary Society also began at this time.

Passionate advocate of transdisciplinarity, has always sought to connect astronomical knowledge with people’s daily lives, in an exercise of self-knowledge and reconnection with nature. He continues to work in the field of Non-formal Education, mainly with the Association of Brazilian Planetariums, ABP<b>planetarios.org.br</b>: open in a new window, of which is the current President.

Below is the list of articles he published on this blog (in Portuguese).