It starts today, Daylight Saving Time. In Brazil, we call it “Horário de Verão”, literally “Summer Time”. I will not entertain any discussion about if it is good or bad (Brazil being a tropical country, its advantages are not self-evident); if it really saves energy; or if it brings any harmful stress to our bodies. (My layman opinion? Good, yes and no…) 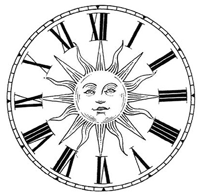 My approach here is strictly semantical and astronomical. I frequently hear complaints (usually from its detractors) that one of the “definitive proofs” that “Summer Time” is wrong is the fact that it starts way before Summer does. This is actually true: “Summer Time” does start before Summer. But the conclusion is wrong.

The seasons are a consequence of two factors: Earth’s motion around the Sun (the revolution) and the tilt of its axis relative to the plane of said orbit. From our terrestrial point of view, what we perceive (and what ancient astronomers perceived as well) is a variation on the position of the rising sun (and also the setting sun). Every day the sun rises and sets in a different spot. And, of course, it has a different trajectory across the sky.

In the Southern Hemisphere, Summer Solstice corresponds to the maximum distance between the rising sun and the East, towards the South; it happened on December 21st or 22nd. Historically, we call this day the “beginning of Summer”. But if this is the further the sun gets from the East, this means that on the next day the sun is already returning. Rigorously speaking, the Summer Solstice should be consider the middle of Summer, and not its beginning.

Since we plan “Summer Time” not based in History, but in solar luminosity, it is only natural that the solstice should represent the middle of “Summer Time”. Respecting the little conveniences of the civil calendar (“Summer Time” always begin between Saturday and Sunday), it is evident that there is nothing wrong about starting “Summer Time” before Summer itself.

You are free not to like this new time zone. But please, don’t say it is wrong… ■